Whenever someone asks me what my favourite movie is, it’s actually really hard to respond. I love a large selection of movies and it’s constantly changing. For example, within the past week I’ve watched “Juno” (freaking awesome), “The Nightmare Before Christmas” (freaking brilliant), and “Corpse Bride” (freaking great). You get the picture. However, if you ask me what my least favourite movie is, well, I have the answer for you in a nanosecond. Because it is—The. Worst. Movie. EVER!

Any guesses? Here, I’ll just give it to you right away.

And why, why, WHYYYYYY would they make, like, three sequels?! Oh lord, why did I buy this movie? Yeah, you read that right. I bought it on iTunes one day because I figured that it was a comedy and I like to laugh. NO NO PLEASE LET ME HAVE THAT 2 HOURS OF MY LIFE AND THAT $10 BACK. It was so terrible. And then I watched the other one, “The Naked Mile” and it was even worse. The beginning of it was horrendous. I’m not even going to say what happened because it was the most disturbing shit I have ever witnesssed in my entire life, other than that video of those assholes throwing puppies off of buildings. It ranks as number two, though. (Ha, number two, ’cause it’s a piece of shit . . .) I’ll just spell this out for you: a grandson and his grandma and a video and some fluids. *Shudders* NONONONONONONOONON STOP. “WHITE CHICKS” IS A COMEDY. “ANGER MANAGEMENT” IS A COMEDY. THIS IS NOT A COMEDY, THIS IS PURE TORTURE.

And to be safe, I’m just going to say that the only people who like this movie are teenage boys and immature male adults. And some immature women, too. There is absolutely nothing funny about this movie. Also, the part where the girl’s boyfriend poops in her washing machine. Am I missing something? Is there humour in that? Is there something magical and beautiful about putting your penis into an apple pie that your mother baked for your family? IS THERE?! The obvious answer is: no. But if that’s what you’re into, then, whatever floats your boat, I guess . . . 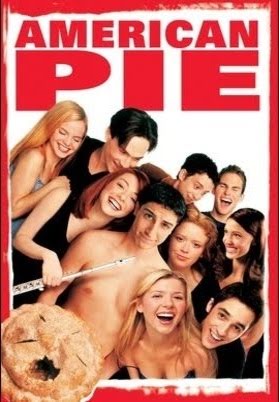 Wasn’t that nice of me? I was originally going to give it -100 but I settled on a flat zero instead. I could go on longer about what makes this movie so bad. But if you want to know, watch it for yourself. Seriously, people. Even “Good Luck Chuck” was better than this . . . at least the guy in it had the decency to do it with a grapefruit rather than YOUR MOTHER’S F^$&ING HOMEMADE PIE.

On a more positive note—it’s the weekend! Make safe movie choices and steer away from movies like this please. .